Does Music Help You Study: Busting The Myths

When I’m doing talks in schools, there’s one question I get asked more than any other: “can I listen to music when I’m studying”? Does music help you study, or is it just going to distract you?

I think it IS okay to listen to music BUT you’ve got to be very careful about the music you choose for certain tasks.

I’m going to explain the science behind listening to music while studying, then break down exactly what it means for YOU when you’re choosing whether to study with music or not.

I’ll even give you some advanced tips on how to match the music to the study task you’re working on, for maximum productivity.

But first, I need to get a confession out of the way…

I’m a HUGE fan of listening to music while studying

As a student, I listened to music pretty well all the time while writing or reading. I still do most of my desk work as a memory psychologist / exam success coach to a backdrop of music to this day.

Last year, Spotify tells me I racked up 757 hours of listening time – that’s equivalent to 31 continuous days of 24-hours-a-day music!

What most study experts say about studying with music

I’m also a big fan of evidence-based advice about how to study effectively.

I’m a trained psychologist, and I care about the science.

So is my habit of studying with music backed up by the research?

Many advisors will point to the 2014 research by Cardiff-based psychologists Perham and Currie (ref), which showed a 60% improvement in exam score if you learn in silence vs if you have music with lyrics in the background.

Based on this study, students often get told that it’s best not to listen to music while studying.

But wait a minute.

When you dig into this research – and its interpretation – there are some pretty serious flaws.

Here’s why I don’t think it’s good evidence that “music while studying = bad”:

The music the researchers chose for the study was “heavy / thrash metal… Death Angel’s Seemingly Endless Time and The Ultra Violence”. Look them up on YouTube if you want.

If any music was going to be significantly distracting, it would be tracks like these!

There’s no way I personally could get much work done to this soundtrack. I wonder what would have happened if they’d tested me with some of my favourite study music – my guess is there would have been a far smaller difference between test results with and without music if the tracks had been less distracting.

What’s significantly distracting to one person might be a great backdrop for a different person.

I think we’d all agree that different sorts of study tasks need different levels of concentration.

If music is problematic because it takes up some of your focus / attention, well, maybe there are times when study tasks are relatively simple, and you have “mental bandwidth” to spare. If anything, listening to music may actually help because the task would otherwise be boring and your mind would wander off.

Finally, music can help motivate you to work in the first place, by lifting your mood and your energy levels.

If it’s a choice between studying while listening to music and working at 80% of your maximum efficiency, vs not studying at all (i.e., 0% efficiency), I know which I’d choose.

In other words, far better to listen to music and get some work done, than to end up doing no work at all.

But so much for shooting down the conventional wisdom: let’s ask science the question “does music help you study”. Is there any evidence for benefits to studying with music?

Listening to music while studying: what the research tells us

Dig a bit deeper into the research, and there are plenty of experiments supporting the benefits of listening to music while studying.

… ideal for keeping your cool when academic pressure is building up.

A review of 51 separate studies found that music has a powerful triple-action on your heart rate, brain activity and release of biochemical stress-reducing effects (Cervellin & Lippi, 2011). Brilliant!

2. Music can pick up you

A good tune puts a smile on your face and motivates you to learn (Gold et al, 2019), and can even relieve symptoms of depression, especially classical and meditative sounds (Trappe, 2009, Schafer et al 2013).

3. Your productivity on repetitive tasks can get a boost from music

Remember how I said that some study tasks need less attention? These sorts of repetitive, less demanding tasks get a productivity boost when you stick on some music, especially if you choose songs with no lyrics, or familiar / boring lyrics (For & Embrey, 1972).

5. The right music can even help on more demanding tasks

You’ve just got to make sure the music you choose is sufficiently simple and repetitive (Kiger, 1989, Cockerton & Norman, 1997). Soft classical can also work (Dosseville et al, 2012).

NB: If you listen to something more complex, especially if it has lyrics, your performance on tasks like reading comprehension and information processing is likely to suffer (Anderson & Fuller, 2010, Johansson et al, 2012). So don’t listen to Death Angel if you’re trying to get your head around complex calculus, go for something simpler instead!

4. Music can motivate you…

…especially if it’s upbeat and gets you fired up! Though make sure it’s not too complex and distracting.

Music can even make you more creative (Schellenberg et al, 2007)!

6. Music may even boost memory

There’s even some evidence that music could help your brain absorb and interpret new information more easily (Sridharan et al, 2007), and boost performance on memory and processing tasks (Bottiroli et al, 2014). Worth noting that both of these studies used classical music, I doubt if the same effects would be true with Death Angel!

As a quick aside, if you’re wondering whether there’s any truth in the “Mozart effect”…

Will listening to Mozart make me smarter?

But if you enjoy it and it’s not distracting you, go for it.

So, music’s good for studying then?

Can I just always listen to music while studying?

The full answer is a touch more complicated than that.

It all comes down to whether the music is distracting you, and you’ll need a bit of self-awareness to recognise that.

The answer to the question “does music help you study” is nuanced – it depends on:

What works for you will depend on the study tasks you have to do, and to an extent, your tastes in music. To give you some idea of how to match the music to the task, here’s a rough idea of what works for me:

Remember, this is what’s worked for me. My habits seem to broadly match up to the scientific evidence (phew!), but we’re all different, so take this table as inspiration rather than a definitive guide.

Some researchers even suggest personality may have a role in determining whether music helps or hurts you when studying. Introverts seemed to do better on complex reasoning tasks without music, whereas extroverts were OK either way (Dobbs & McClelland, 2011).

To sum up, music absolutely CAN help you study…

… but only if you choose tracks that don’t distract you from the task at hand.

What’s distracting? Well, it all comes down to:

Case in point: in the course of writing this article, I started with the soundtrack to The Matrix for a real shot-in-the-arm energy boost, before later finding it too distracting and switching to Zelenka’s Miserere for something that was still exciting, but less distracting than The Matrix. I briefly went via Penguin Café Orchestra, which was fine for a bit, but ultimately not quite stimulating enough to get my brain moving on the particular Thursday I wrote this on.

When I was brainstorming points to make for the table above about “music while studying: how I match the track to the task”, I switched off the tunes completely. I found that task particularly demanding, and quickly realised I needed complete silence while doing the hard thinking about how I wanted to arrange the table, and what examples I wanted to include in each row.

So, how does this compare to how you like to use music while studying?

Do you agree that music can help you study, or does you experience suggest otherwise?

What are your favourite study anthems?

Would love to know – let me know down in the comments.

Just before you go…

It’s fair to say that researchers have a bit more work to do on refining the advice on WHICH kinds of music are best for different sorts of TASK. But elsewhere in the science of how to study smart, the research is pretty definitive:

There are now many principles for how to study well – focus, memory, recall – where science gives us an exact set of “DOs” and “DONTs”. It’s simple: if you want to achieve the bigger grades in the least possible study time, this is the advice to follow.

I’ve bottled up ALL of my all-time FAVOURITE science-based study strategies for students in one handy cheat sheet – use the form below to claim your free copy now to read now or save for later:

Need some music to study to? Check out our ultimate compilations of epic study playlists:

Read My Test Technique Book & Score Higher In Your Exams 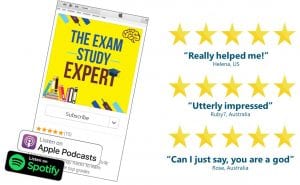